Recently, a customer contacted us with a problem. They needed a safe way to inspect and clear their conveyor chute. The plan was to fabricate an inspection platform, enclosed with railing, with a caged ladder for access. The top of the ladder would require a self-closing gate in order to meet OSHA requirements for guarding at ladder way openings, as the ladder was not offset from the platform.

As we started with concept drawings, we realized that the traditional fabrication of a post in each corner would not work with their application. The leading edge of the inspection platform extended into the aisle-way and a post in that corner would encroach on forklift traffic. 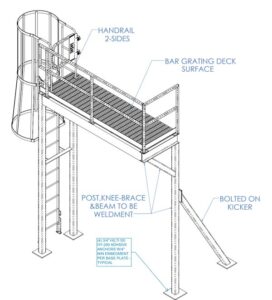 Upon consulting our PE, it was decided that we could use a short knee brace at the corner in question, and utilize a bolt-on kicker off the rear post for reinforcement. The kicker was designed to nest underneath their existing equipment.

As the installation location is open to the elements, and there is a high likelihood of debris, the inspection platform utilizes an open bar grating deck. This allows dirt and water to fall through the treads instead of collecting on top of a solid surface deck. 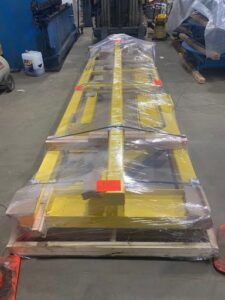 The inspection platform shipped knocked down for freight savings. A smaller load takes up less space on a truck and costs less to ship. It also allows for smaller, lighter pieces that are more easily maneuvered at tough to access locations. Installation required basic tools and no hot permit was required.

All components are designed for bolt together installation with basic hand tools. This eliminates the need for field welding, hot permits, and additional finish touchup around weld areas. Installation for the platform and ladder requires two men and one day. As the height is under 12 ft high, a forklift and A frame ladders or a scissor lift are all that are required for install. 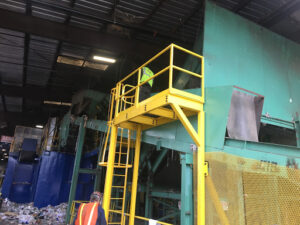 With the new platform in place, this customer can now safely inspect and perform maintenance on their chute at any time without impeding regular business activity in the area. Fabrication lead time for the platform, ladder, and gate was quoted at 5-7 weeks after approved drawings were returned.  The material was shipped at right on time at 5 weeks. Pricing was also what the original estimate was. On time. On budget. Contact A-Mezz for help with your next project.

Does my ladder need a handrail?

Almost all ladders will have an extension at the top, with the only exceptions being ladders accessing roof hatches, manholes, floor doors, or anything else that closes over the top of the ladder. If you are exiting the ladder to the side or going to an offset platform due to the 30’ maximum climbing distance between ladders, you will need to add four more rungs above the platform. Those rungs are only to be used for hand-hold only, to give you something to grab onto to safely exit the ladder.

Side step ladder platform for climbs over 30′ in length

If the ladder is going up to a wall, to a roof, or to a mezzanine, then you will need extensions on the ladder for the “walk-through” exit of the ladder.

We have three different designs of walk-through handrails and I’ll go into the details on each of them below. 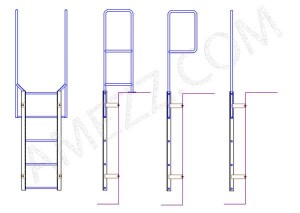 The first design, the “8” shape, is our standard ladder design. This is the most commonly used handrail setup as it allows for the top of the walk-through to mount to the landing surface, providing the greatest rigidity at the handrail. It also makes installation easy, as there are no questions where the top rung mounts; it is always installed properly meeting the top of the landing surface as required by code.

In cases of short parapets or locations where you cannot have the walk-through handrail anchor to or even set upon the roof you would use the second “P” profile, our “self supported walk-through handrail”. This handrail design works well when there is a parapet under 14” high that the handrail mounting pads would not line up with. It is not a necessity to use the “P” shaped handrail in those instances. Many installers still prefer the “8” layout for the added cross brace back to the ladder. When installing a ladder with our self-supported walk-through handrail, be sure to install properly, with the top rung level with the top of your roof. There is no foot pad at the top to ensure this is done, so installation just requires a check to be sure of compliance.

Not shown is our step across platform, which is essentially a crossover used when site conditions require the ladder rung to be more than 12” away from the landing surface as required by OSHA standards. Most commonly, this is used on locations with gutters that are more than 5” off the face of the climbing side of the wall. 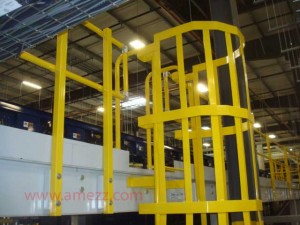 Do you need a ladder gate at your ladder opening in your railing? According to OSHA 1910.28(b)(3)(iv)“Each employee is protected from falling into a ladderway floor hole or ladderway platform hole by a guardrail system and toeboards erected on all exposed sides, except at the entrance to the hole, where a self-closing gate or an offset must be used.”

This means that every ladder opening needs to be either (a) Offset so that a person cannot walk (or fall) directly into the opening or (b) Protected by a ladder safety gate. It is an easy either/or. The most common ladder installation locations are not offset and as such require safety gates. Below you will see some photos of ladders and top view sketches clarifying why each of their orientations either do or do not require a gate. Note: ladder chains do not meet OSHA standards.

Another seemingly redundant standard from OSHA further increases the areas requiring gates is 1910.29(b)(13) and 1910.29(b)(13)(i): When guardrail systems are used around holes that serve as points of access (such as ladderways), the guardrail system opening: (1910.29(b)(13)(i) has a self closing gate that slides or swings away from the hole, and is equipped with a top rail and midrail or equivalent intermediate member(…).

This standard opens up gate requirements to manhole covers, roof hatches and other similar systems that would remain open while accessed.

Now that we know what the code requirement is, it is time to review a few common ladder mounting orientations to discuss where they fall under the code. 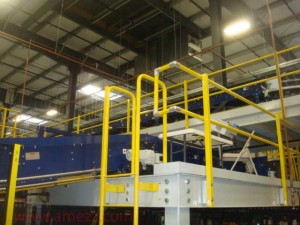 Fixed ladder mounted to side of platform

The above fixed ladder is mounted onto the side of the platform. Work is performed further down the platform but it is possible to fall directly down the ladder opening. This location is not offset and as such would require a swing gate. See the below top view sketch for clarification. 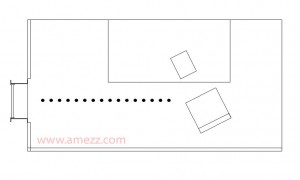 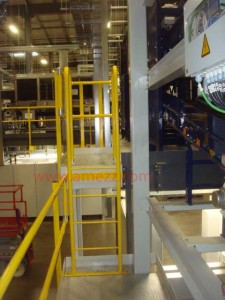 The above ladder accesses a platform and then turns to access the main walkway. This ladder is offset and would not require a swing gate at the opening. 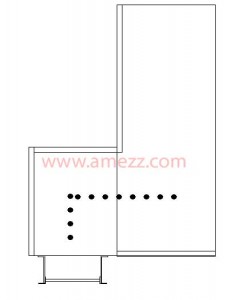 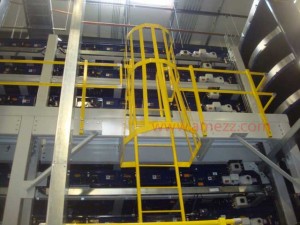 Ladderway opening on side of catwalk

Above is a very common ladder mount position. This one can be tricky until you lay it out from the top view. From first glance it looks like because the ladder is off to the side that it would be offset from the normal flow of traffic, but if you fell at that point of the catwalk there would be no guarding to protect you. A swing gate is a requirement at this location. 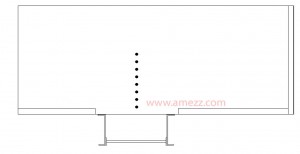 We recently were called out to a site with a corrosive environment that was in need of replacement stair rails as all of the original handrails were rusting and in disrepair. The paint was almost all chipped up, and some areas of the handrails were so corroded you had to choose between risking a fall by not grabbing the stair handrails, and grabbing the handrails but risking the need for a tetanus shot. 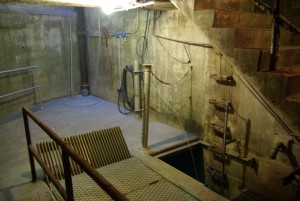 The above picture shows the lowest section with a bollard and chain assembly “protecting” the pit ladder that is bent, corroded and weakened at the base. It also doesn’t meet OSHA standards for rail heights or strength at top rail. You can also see the rusted handrail and stair rail. Anytime you have a damp environment it’s best to use a material besides carbon steel – Galvanized steel, aluminum or stainless steel all perform much better over time. Remember that corrosion doesn’t just make the metals look bad, but it also weakens them, substantially lessening their lifetime usability. Sure, the other metal options cost more than plain carbon steel, but when you have to replace the material before its time you have to pay for demo of the inferior material, fabrication of the new material, installation of the new material and have the lost time from the job being out of service during that process. 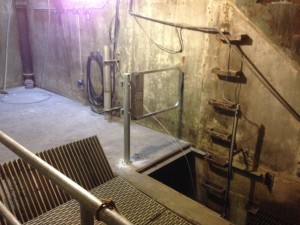 Here is the same view after we finished. We removed the bollard and replaced it with one with a more sturdy post and baseplate. The chains were removed and replaced with our MLG Ladder Safety Gate with a hot dipped galvanized finish. The new set-up is going to stand up to the moist, caustic environment much better and easily meets OSHA standards for guarding at a ladderway opening.

29 CFR 1910.23 Guarding of floor and wall openings and holes. “(a)(2) Every ladderway floor opening or platform shall be guarded by a standard railing with standard toe board on all exposed sides (except at entrance to opening), with passage through the railing either provided with a swing gate or so offset that a person cannot walk directly into the opening.” 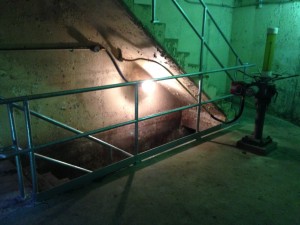 All of the new handrails were done to OSHA standards with a 4” toe kick at the bottom, a 21” mid rail and a 42” top rail. Along the stairs, the stair rails were 34” high from the edge of the nosing. There was no wall mounted rail as the stair width is less than 44” wide and there is only one open side. 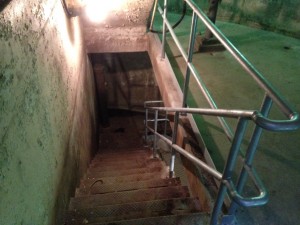 Smooth, continuous handrail to maintain contact with rail throughout the climb

The replacement stair rails are designed for a seamless transition between flights, allowing someone to slide their hand from the top rail to the bottom of the stairs without letting go of the rail. This gives a nice, clean look and also allows for safer access and increased strength of rails. Added strength also comes from the baseplate design with a four bolt pattern to maximize rail strength and minimize movement regardless of where pressure is applied front, back, top etc.

There were some unique challenges to this project with the winding rails, but with proper site dimensions and knowing the details about the installation environment, it was quite easy to supply this customer with replacement rails that fit and will last them a lot longer than their previous set.