These are some photos of a mezzanine floor job we did for a site in Idaho. The contractor was looking to add a 50’ wide x 35’ deep mezzanine for additional pallet storage space in their client’s warehouse.

The warehouse’s cement pad was not initially setup to accommodate the loads from the mezzanine columns. The initial mezzanine design utilized beam and c-section framing with 12’6”x17’6” nominal column spans. While the warehouse had some existing reinforced concrete piers, they would have needed to install twelve additional footers in their pad to support the other columns. They provided us with a layout of their existing concrete piers, and asked us to come up with an option to help them limit the number of additional footers they would need to install as much as possible. 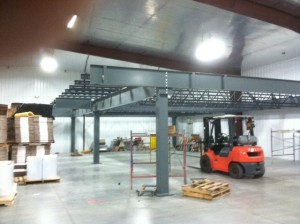 Utilizing a beam and bar joist frame, we were able spread our column spans out to 25’ x 28’6” nominal with a 6’6” cantilevered edge. This allowed us to set four of the six columns on top of the customer’s existing reinforced concrete piers. This also had the additional benefit of allowing for a more open space below the deck.

The customer had a couple options on how we could work around the large tapered building columns along the back wall. We could have dropped an additional column and used additional beams to frame around the center tapered building column, but the customer instead chose to pull the platform away from the wall just enough to clear them, and add some additional handrail along the back end of the cantilevered storage mezzanine for fall protection. 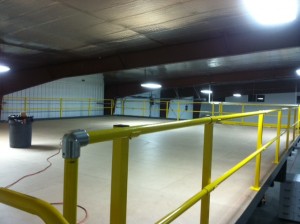 Unfinished resindek surface with both face and deck mounted handrail

The platform was designed for a 125 pound per square foot uniform live load and used a cost effective corrugated roof deck and unfinished resindek to form the mezzanine deck.   This gave the end user a smooth surface to work on that wouldn’t peel with the rolling loads of the pallet jacks, and allowed them to store their pallets of packing materials on top of the deck as long as no pallet and pallet jack weighed over 2000 lbs.