We were contacted by a customer who was 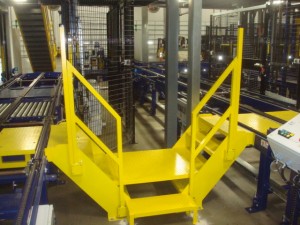 looking for an easy way to circumvent a winding nest of conveyors so they would not have to serpentine around them, or worse, crawl over/under them. Some customized crossover stairs were just the ticket. We had to ensure that we did not interrupt the flow of traffic on the conveyor and next to the conveyor. Each crossover was fitted with front steps and rear steps when travel beyond the steps was necessary to let their employees have access to all four sides of the crossovers. The important thing was to increase mobility throughout the plant, while not cutting off areas they already had access to.

Each stair crossover was fitted with a 34” high 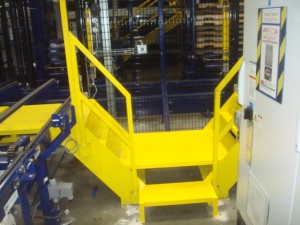 handrail on one side and had closed diamond plate treads and decking to avoid slips and falls. Each platform was 30” high. Normally we’d just make the crossover level at the top so that you have less up and down when going across the conveyors, but the customer had some obstructions we had to work around. In the foreground of the photos below you can see that there are some control panels and electrical boxes for the conveyors that we had to keep clear. As we go higher with the mid platform we have to go longer with the stairs coming from the front and rear, which would then cause the stairs to interfere with those control panels, so the customer decided that they wanted the mid platform lower. 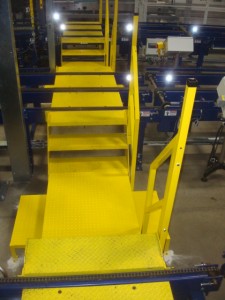 There was also the option to go without the mid platform and the crossover stairs coming from the front and rear of it. That was actually the original design, but their employees did not like having to walk up and down and up and down over and over – especially if they were carrying something with them. The mid platform being installed at a lower height was the compromise with regards to comfort, safety and available space.

The last photo in the set shows a location 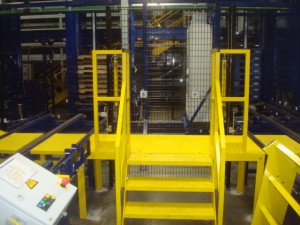 where the stair crossover was actually far enough behind the conveyor control panels to do a conveyor height platform with stairs coming from the front only. All of the crossovers were installed with the ability to be removed without too much difficulty should there be any faulty equipment that needs to be removed for repair or replacement beyond the stair.